A Choice of Promotions

Continuing our recent theme, here is a hand where E-W can beat South’s 3♥ contract in one of two ways, each involving a trump promotion. 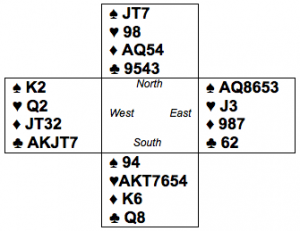 East’s 2♠ was a “Weak Two”, showing a 6-card suit and less than opening values.

With trumps 2-2, it may appear that the defense can manage four black suit winners and nothing else. But, no, the defense can also rustle up a trump trick! West cashes the ♣A and ♣K and leads a third Club. East must ruff with the Jack and now the defense has a trump trick, because an overruff by Declarer sets up West’s ♠Q. But you see the snag? Yes, of course, Declarer won’t overruff, instead she’ll dump a Spade loser, still making 9 tricks.

Let’s try it a different way. This time the defense starts out by cashing its Spade winners, and, at Trick 3, East leads another Spade. As before, this promotes a trump trick for the defense, whether Declarer ruffs high or low. But, she won’t do either, again she’ll wriggle out of her predicament by pitching a loser, this time it will be a Club.

OK, here’s the defense’s last chance to get it right! They must cash all four of their side-suit tricks first. So, the ♣A, ♣K, ♠K, ♠Q take the first four tricks. Now, at Trick 5, another Spade from East dooms Declarer. The defense having cashed all their winners first, Declarer has no losers left to pitch, and this time the trump promotion produces a 5th trick. Down one!

Post Script It may be trump promotion overkill, but there is even a third one on this deal. Picture East declaring 2♠ (perhaps South was snoozing through the auction). The ♥A, ♥K are cashed, then the three Diamond winners. When North leads a fourth Diamond, Declarer is helpless, and the defense has conjured up the setting trick in trumps. 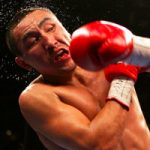 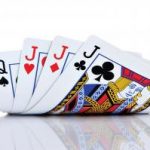