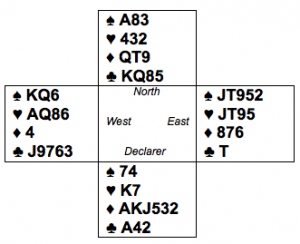 After N-S reached 3NT, East, figuring that his side had a profitable sacrifice, offered his partner a choice between 4♥ or 4♠. This pushed N-S to the perilous contract of 5♦, which, as you will see, Declarer is about to bungle.

Against 5♦ West leads the ♠K, won by Dummy’s Ace and trumps are drawn. Declarer can count 10 top tricks, but where is the 11th? Not the ♥K as West needs the ♥A to justify his Takeout Double. That means that a 4th Club trick is required. Are Clubs 3-3? Let’s count the hand. East bid both majors and is no doubt at least 4-4 in those suits. He also showed up with 3 Diamonds. That leaves two Clubs at most. But would East bid so much with 4=4=3=2 distribution and virtually no HCP? No, it seems more likely that East is 5=4=3=1 and, if so, Declarer must hope that East’s Club is the Jack or Ten or Nine. She cashes the ♣A and, seeing East’s Ten, prepares to take an impressively deep finesse of the Eight on the second round!

Well counted for 11 tricks except for one tiny detail. That’s right, West can also count and he inserts the Nine on the second round of Clubs. Now Declarer is locked in Dummy with no safe way back to his hand (if he plays a Spade, East will be sure to win and fire a Heart through). Down one.

Declarer’s play was flawless right up to the point where he called for Dummy’s ♠A at Trick 1. Instead, he must hold up the Ace and win the second round. That way, later in the play, he can get safely back to hand with a Spade ruff and take that second Club finesse. Yet another contract bites the dust because of hasty play at Trick 1. 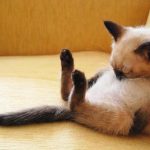