This week you are South, defending 3♠. You must make three good plays in order to beat this contract. Are you up to the challenge?

Before you take your place in the South seat, let’s admire Declarer’s robust Spade suit. The ♠T and ♠9 are big cards! After the high enemy Spades have been knocked out, those intermediates can look after the rest of the suit. In fact, even if the trumps split 4-1, that lovely Spade Nine will come to the rescue and make sure that the enemy ♠8 does no damage. Well, “Phooey!” is what N-S have to say to about that. They are about to score their lowly ♠8, even though trumps are 3-2!

Sitting South, you lead the ♥J. That holds the trick, Partner playing the Ten. You lead another Heart, this one being won by Partner’s Eight. Declarer ruffs the third round with the ♠9, and it’s time for your first good play. Don’t overruff! Now Declarer leads the ♠Q, and you make your second good play, you duck your Ace! Well, perhaps that play was not so brilliant, there was no rush to take that trick. And, anyway, you would look extremely foolish if your Ace crashed Partner’s singleton King! As it happens, Partner wins the trick with the ♠K and, with relentless single-mindedness, leads another round of Hearts. Declarer ruffs with the Ten and it’s time for the third good play. Don’t overruff! That’s right, your stubborn refusal, on three occasions, to play the ♠A has orchestrated a trump promotion! The defense scores two Hearts and three trumps for down one. Who would have thought that A86 would produce two natural trump tricks? 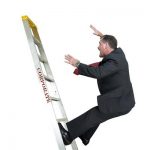