Crime in London appeared to be taking a vacation, and Sherlock Holmes found himself on opening lead at the Baker Street Bridge Club:

Let’s eavesdrop on the post-mortem in Holmes’ 221B bachelor quarters.

Watson: Dash it, Holmes, why not lead the unbid suit? I must have Hearts.

Holmes: Indeed, dear chap, you had four, but so did declarer.

Watson: We know that now.

Holmes: And I knew it before I made my lead. 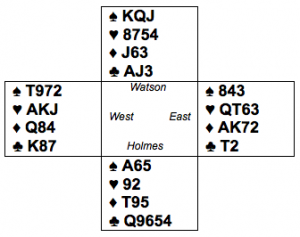 Holmes: No, it was the curious matter of your bidding.

Watson: But I didn’t bid.

Holmes: Yes, that was most curious. My 6-count and the opponents’ bidding told me that you had a decent hand. And yet you did not overcall 1♥.   Clearly you had less than 5 Hearts. The auction also told me that West had less than four Hearts and East less than 5. Thus, the Hearts were 2-3-4-4 around the table.

Watson: Very clever. I suppose you also knew that West had three Clubs.

Watson: You did know?

Holmes: It seemed most likely. I had five and East had at least two.

Watson: So, if East had two Clubs and

West had four then I would have had just two. With that I would no doubt make a Takeout Double of 1♣.

Holmes: By George, I think he’s got it!

Yes, of course, Holmes did not lead the unbid Hearts, he led through West’s Club suit. But how on earth did he know to lead the Queen, the only card in his hand which beats the contract? That’s a story for another day. 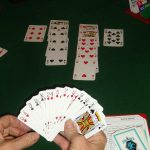