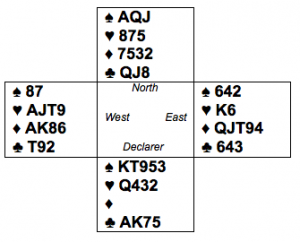 N-S stumble into 4♠ and West leads ♦A. Declarer can count 5 Spade tricks and 4 Clubs. That’s 9, where’s the 10th? A ruff in the “short hand” is a common ploy for an extra trick, but that won’t work here, Dummy has no short side-suits. Any ideas?

Does ruffing the opening Diamond lead generate a 10th trick? No, that is a ruff in the long hand, that still leaves us with only five trump tricks. But suppose that Declarer ruffs three Diamonds. Now he gets six trump tricks via Dummy’s three high trumps plus three ruffs by Declarer (the long hand). In effect, Dummy becomes the master hand, the hand which will be used to draw the enemy trumps after Declarer has got his ruffs.

The thing to remember here is that Declarer needs three ruffs for the Dummy Reversal to produce an extra trick. It’s that third ruff which reduces Declarer’s trumps to a shorter length than Dummy’s. Actually, it would even be possible for Declarer to get a fourth ruff, but there are insufficient entries to take advantage of this. So, 10 tricks it is. 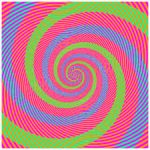 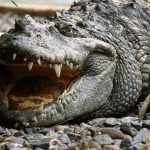