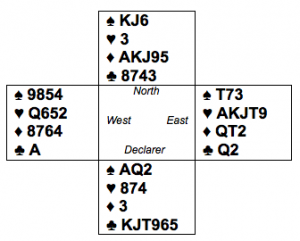 On defense, in third hand, it’s standard procedure to win the trick with the lowest card possible, that’s the best way to let Partner know what is going on. So, when West leads a low Heart against 5♣, East would normally win that trick with the King. But this week’s East decided to win the opening trick with the ♥A, supposedly denying possession of the King. He then returned the ♥T. What was East up to?

To answer that question put yourself in Declarer’s shoes. From East’s play to the first two Heart tricks Declarer deduces that East does not have the King (he would have played it at Trick 1), nor does he have the Jack (he would have returned it at Trick 2). So, it appears that East started with ♥AQT9x.   Based on this logic Declarer will calculate that East has a maximum of 8 HCP outside the Club suit. Now, when Dummy leads a low Club from the board and East plays low, how should Declarer guess? East needs the ♣A for his opening bid and must have started with ♣A2 or ♣AQ2, so let’s not blame Declarer if he guesses wrong and goes up with the ♣K, playing East for ♣A2.

If East plays more routinely, winning the ♥K on the first round and continuing with the Ace, then he no longer needs the ♣A to make up his opening bid. That being the case, Declarer will be more inclined to make the normal Club play of running the Eight on the first round, hoping for Q2 or AQ2 in the East hand (two chances) rather than A2 (only one chance). Nice deception, Mr. East! 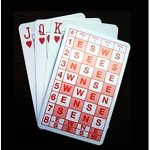 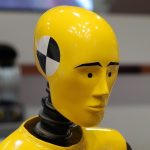