3NT is the normal contract and 9 top tricks are available. But this event was duplicate bridge where it’s not always enough just to make your contract, it’s also important to make overtricks. So, the question for you South players is “How do you make 10 tricks after an opening Diamond lead?” 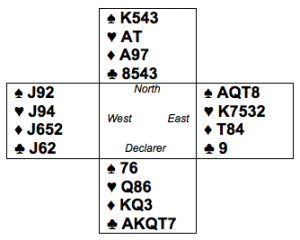 Hearts are the best place to get that extra trick and there are two ways to tackle the suit … either finesse the Ten hoping that West has the Jack … or lead towards the Queen hoping that East has the King. As you can see both plays work and will earn that valuable overtrick. But playing East for the ♥K is dangerous! If it turns out that West has the King then he can shift dramatically to the ♠J and South’s cold contract is down one! The correct play is to win the opening lead in hand and finesse the ♥T, forcing East to win the trick. On this deal, East is the “safe hand”, the one that cannot make the deadly Spade shift through Dummy’s King.

Post Script When Declarer led a Heart towards Dummy’s AT West could have made a brilliant and spectacular play! If he rises majestically with the Jack then Declarer will fear that West started with the King as well. If that’s the case then the 10th trick cannot be developed without letting the danger hand gain the lead and the play of the ♥J might persuade a nervous (aka chicken) Declarer to settle for 9 tricks. But a bold Declarer will go for the gusto, playing a second round of Hearts and risking the contract for the precious overtrick. 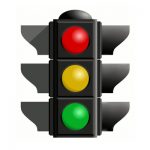